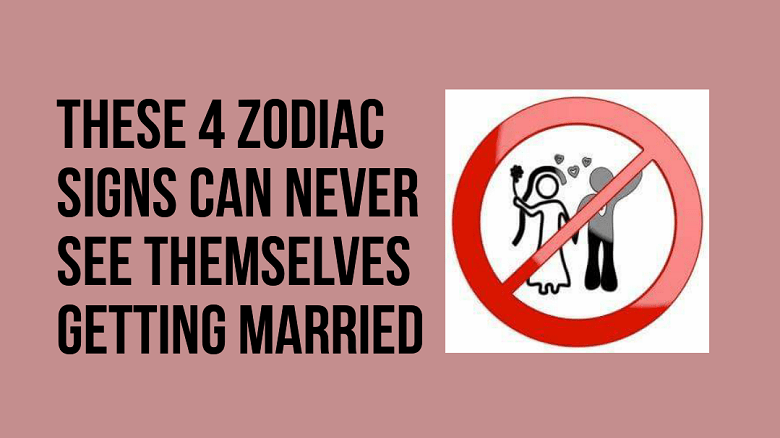 When it comes to tying the knot, then you would do well for yourself to bet on the fact that these Zodiac signs just aren’t having any of it. It takes a lot for someone to commit to another person for the entirety of their shared lives. One thing is for sure: commitment definitely isn’t for everyone. A lot of people break into cold sweats and have mini anxiety attacks at the thought of committing themselves to a single person for life. It’s a natural response. The concept of being romantically intertwined with someone for the duration of forever can be a daunting idea to deal with.

However, for some Zodiac signs, perpetual commitment is just something that is considered borderline unfathomable. It is an idea that would have never even crossed their minds had someone never brought it up. Not to say that these 4 Zodiac signs will never manage to be lucky in love, it’s just that the idea of a long-term commitment (i.e. marriage) to another person is just out of the question. In fact, the people belonging to these 4 signs might even be better lovers than most other people. It’s just that they tend not to respond to well to the idea of wedding bells. It’s ironic to note that a lot of other signs have no problems with the idea of establishing long-term romantic partnerships, and yet they always find themselves lost and unlucky in love.

There are tons of people in this world who have no problem with committing themselves fully to the idea of a marriage. There are some people who are slightly hesitant to the idea, and yet they still manage to find the resolve to take the plunge anyway. And then there are those people, like these 4 signs in particular, who are just going to say no and run away from any situations of commitment as fast as they can. These are the 4 signs who are extremely unlikely to tie things down.

An Aries lives by a code. They are people who set rules and standards of living and they do their best to always do right by these set of rules. An Aries is a stickler for principles and values, and they are never lenient when it comes to their core beliefs. They are rarely ever willing to compromise their principles for the sake of expediency or harmony in the relationship. That is why a lot of potential partners and mates can get turned off by an Aries deep into the relationship when they realize that their “strict nature” is not just a phase that they are going through.

An Aries also likes to march at a very specific pace. They don’t want to have to be put in a position wherein they have to choose to wait for their partner and lag behind or to just leave their partner in the dust. That is too much of a difficult choice to make, and an Aries would choose to avoid that scenario altogether. An Aries also knows that the self is always the priority and that they could never fully give themselves over to another person just like that. They put too much value in their self, that a lot of people will consider them selfish as a result.

The one thing you have to know about Gemini people is that they are great communicators and conversationalists. They have the charm, eloquence, and confidence to carry a conversation in a manner that is both meaningful and entertaining. However, whenever topics of conversation start to hover around ideas of long-term relationships and commitment, you will find that a Gemini will be at a loss for words. They will start to shrivel up into a mute and refuse to relay their thoughts and opinions on the matter.

Casual dating is the way to go for a Gemini because they enjoy the fun of the social interactions, but they just can’t take on the pressures of long-term commitments.

A Sagittarius is the perfect example of a person who only likes to go with the flow. They are incredibly chill people who don’t like to take life too seriously. They value their solitude, and they also enjoy hanging out nonchalantly with friends. They entertain the thought of casual dating, but they tend to clam up whenever things start getting too serious.

A Sagittarius person always values freedom and independence above everything else. They feel like being in a serious relationship can only stifle their growth and deter them from pursuing the things that they really want out of life.

These Aquarius people are very curious cases. They are very comfortable with establishing deep and intimate connections with people, and yet, they are uncomfortable with the ideas of manifesting love through long-term relationships. An Aquarius has a very sporadic personality, and it can be difficult to tell how they would be acting from one minute to the next. That’s why it’s virtually impossible for them to find people who can tolerate being with them for prolonged periods of time.

For one minute, the relationship could be going well, but then an Aquarius’s spontaneous personality can kick in, and things can come crumbling down in a heartbeat.