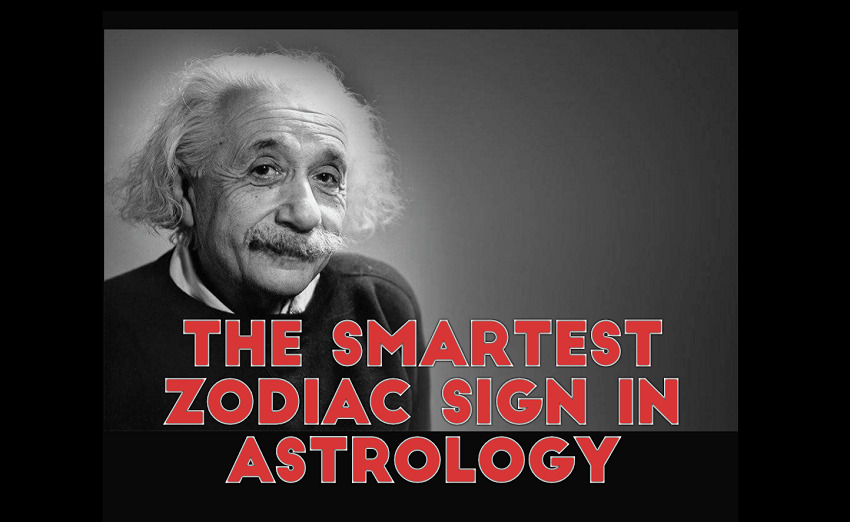 Some astrologers believe that Virgo and the air signs, Aquarius, Gemini and Libra, are the smartest zodiac signs in astrology. However, not every zodiac sign can know everything. According to Howard Gardner, there are nine different types of intelligence, musical rhythmic and harmonic, visual spatial, verbal-linguistic, logical-mathematical, bodily kinesthetic, interpersonal, intrapersonal, naturalistic and existential intelligence.

So, there isn’t a precise answer to the question: “What is the most intelligent zodiac sign?”.

Aries are body smart or in other words they have a bodily-kinaesthetic intelligence. People that are body smart know how to balance their strength, speed and flexibility. This means that when it comes to bodily-kinaesthetic intelligence, Aries is the smartest zodiac sign. They are independent and know how to manipulate other people, in order to get what they want, by using their body. Aries use their body language to express themselves. However, sometimes they should think before they act, so they’ll avoid any uncomfortable situations.

Taurus also have a bodily kinaesthetic intelligence. They know how to control their emotions and body language. Taurus’ mind and body are in sync and they can do whatever they set their mind to. They use specific physical skills to get ahead in their career and love life. People who are body smart can have great careers as actors, soldiers, athletes, dancers and craftspeople. Taurus’ motor skills are more developed than any other zodiac sign.

Gemini are word smart or in other words they have a verbal linguistic intelligence. This means that they have a great understanding for the written and spoken language. Also, they use their linguistic skills to dazzle everyone and because they have a way with words they seem like they are the most intelligent star sign. This is true, when it is time to analyse and discuss books, poems, or when they show off their orator skills. Gemini can memorize dates and numbers like no other zodiac sign.

People born under the Cancer sign have an interpersonal intelligence. They embrace their feelings and are sensitive to other people’s emotions, problems, moods and reactions. Cancer do great work in teams, because they know how to organize the group’s activity. Their social skills make them great leaders and because of this, they often build careers as politicians, teachers and managers.

The smartest zodiac sign, when it comes to intrapersonal intelligence is the Leo. This sign has the capacity to comprehend their personals thoughts and feelings. They know their limitations and strengths, and know how to use them in different life situations and especially to acquire something they want.

One of the most intelligent zodiac signs is the Virgo. Virgos are ruled by their reason and they have a logical mathematical intelligence, but also they have a general intelligence. Numbers are their strength and they use their logic and calculating skills to solve difficult math and physics problems. Some of the smartest scientists and mathematicians are born under this zodiac sign.

People born under the sign of Libra have a musical rhythmic and harmonic intelligence. This doesn’t necessarily mean that every Libra has a good voice or is talented in playing an instrument. Aside these two previously mentioned characteristics, Libra is the smartest star sign when it comes to composing music, writing lyrics or simple remembering the lines of as much songs as possible.

Scorpios have a visual spatial intelligence, which means that they have the ability to think in three dimensions. They have a sixth sense for everything that is happening around them and have the ability to assess people’s personalities. They can sense things and people’s feelings before they even start.

The Sagittarius has an existential intelligence. This means that people born under this zodiac sign are spiritual and can spend a lot of time discussing about the human existence. They obsess over the meaning of life and death and often have really interesting and profound points of view.

Capricorns, like Virgos, also have a logical mathematical intelligence. They use logic and facts to explain things in life and believe only in what they can see or feel.

Aquarius have a naturalistic intelligence. They understand and know a lot about the flora and fauna and are in touch with the nature. They are sensitive, ethical and gentle which makes them great candidates to work with animals. In this smartest zodiac signs list, Aquarius is the smartest zodiac when it comes to the environment.

Pisces have an interpersonal intelligence. They are “people smart” and can effectively interact with other people. Also, they know when someone is in trouble and offer their help and support. Pisces enjoy being around a lot of people and discuss different topics. Often, they are the center of attention.