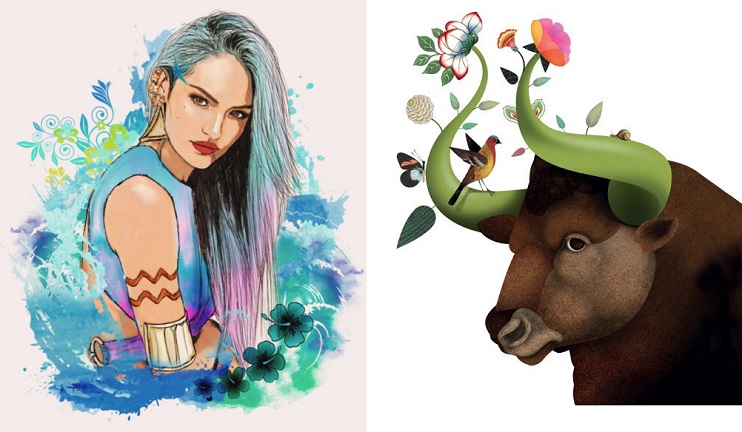 Both the Taurus and Aquarius are strong individuals with rather fervent ideas of what they want in a partnership, and those ideas clash in many ways! Taurus is somewhat more traditional in views of relationship while Aquarius takes a lighter and friendlier way for being in an association.

A Taurus man is an individual with a sensible head and a loving heart. It is of utmost importance for him to make a noticeable imprint upon the world around him, and can become demanding or too involved when he is not being successful at this. Being a bit more traditional, he is often less than comfortable dealing with the realities of modern society, which can result in some anxiety. Emotionally, he is in no rush to let his feelings unfold, so when he opens up it is a sure sign that he is serious about the relationship.

An Aquarius woman is a realistic person who believes in her own dreams and believes in her own path. She has air like qualities to her personality is something that makes it clear that even if one suspects to know her well, she is unpredictable. She floats around the mental sphere, dabbling in all sorts of thoughts and ideas but her personality is hard to peg down and her values are as consistent as can be. She is a truly unique individual and is not willing to play by anyone’s rules on love but her own. In a relationship she is very faithful to her mate but can be detached and low at emotions at the same time.

The Aquarius woman seems simultaneously bizarre and intriguing to the Taurus man, which is exactly what makes him so attracted to her. She pulls him out of his practical, sensible reality and forces him to look at things in a more abstract manner, opening up an entirely new world to him. She is strong; she is intelligent and has her different ways which make her personality so attractive and different. With due course of time, he finds her much more aware than she initially appears in the beginning. She makes a charming companion for him with all her heart given to him with true dedication. Her love is tender and inspiring for him which helps him to have a better result in both his personal and professional life. But he may sometimes find her airy and aloof with nothing much to express and this can be somewhat disturbing for a romantic man like Taurus.

A Taurus man is genuinely a gentleman who truly touches the heart of the Aquarius woman and finds his way to rule her deepest emotions. He is possessive but not jealous, which gives a better shape to the relation as he never bars her personal freedom and independence. But at the same time he is always there to take care and protect her from all the worldly complications, to make her feel secure and comfortable. He respects her and always appreciates her views unless they sound too hazy to him. She resents being underestimated about as much as she despises having her limited and this thing is well understood by the patient Taurus lover. He is happy with her to have her own world except for the part that she gets over involved in it and forgets her role towards him and home, as she has to always remember that he is a traditional person and it is better not to play with his temper.

As the days of life keep drifting with love and bliss, the Taurus man and the Aquarius woman truly accept the others’ way of thinking and functioning of their relationship becomes cozier. She teaches her Taurus male to be a bit more easygoing and he teaches his Aquarius lady to be more expressive and attached to the near ones. Together they make a strong bond of understanding with the colors of both love and friendship shimmering gracefully with a melodious tune to make them feel sweeter. They attend to each other without over-shadowing the other one’s personality. Their home is a warmer place where rights and duties go lovingly together and rainbows of the imagination of Aquarius woman and painted beautifully by the real paints of her Taurus man.

As the airy element of Aquarius woman and earthy element of Taurus man meet on a physical level, the experience in the beginning maybe fluttery, and inconsistent. This is because, the physicality of romance is not what Aquarius woman is most focused on, although she may find her curiosities aroused on a regular basis. This seriously contradicts the Taurus man’s approach to sexuality. Essentially, in a committed relationship, he desires a healthy dose of regular lovemaking, but doesn’t require a whole lot of variety from his partner. He cares about the tangible aspects of life, and bases his judgments on what he can feel with his own two hands. Meanwhile, she may begin to drift away, sensing that his needs are a little too simple to make them interesting enough to satisfy. Still, he brings out the sweet, affectionate side of the Aquarius woman that could almost crave attachment, and her respect for his straightforwardness inspires patience on her part making their sexual life smoother and warmer with time. Her approach towards intimacy is some with hurried excitement, some with nervous anticipation. He is often more absorbed with the sensation of his motions coursing through his body in explosive paroxysms.

There are a few fundamental clashes with the pairing of Taurus man and Aquarius woman as they differ in their outlook. He may view her abstract mentality as impractical and insufficient for evaluating to world around her. This results in protective instincts on the part of Taurus man. While she finds him more wrapped in his own thoughts and unprepared to accept the world. Other than this, she may be head over heels in love with the Taurus man, but she is likely to show same amount of affection and commitment to her friends. This makes him feel insecure. When issues reach the surface, both of them can display a powerful stubborn streak and make it difficult to come to terms. If Taurus learns to let go a little and be satisfied with what she has to offer, then this could work and if she contributes more expressively to their relationship things can be even better. /http://www.ask-oracle.com/sign-compatibility/taurus-man-aquarius-woman/